We’ve been thinking about doing little chocolate round ups every month to showcase our favourite bars and guest bars we’ve got in the shop and thought we’d start with our favourite lock down purchases. We’ve tried at least 30 different products (mainly bars) from 13 different companies during lockdown, and that’s on top of the many Cocoa Runners boxes that have dropped through the letter box (a topic for another day but are you even a chocolate maker if you’re not a chocolate eater? I mean, I wouldn’t expect to make a decent brownie if I’d not eaten one before.. however, I have eaten many a brownie and failed to master them.. there’s probably something in that too..).

This one’s been on the ‘to try’ list (we do keep an actual list) for ages – Bullion’s FINE Milk Every now and again you come across a really interesting milk that you can’t put down and this is one of those. We finished this Ecuardorian, buttery, caramelly delight in one sitting.

On a mission to try lots of new makers I spotted this company on the Chocolate Ecstacy Tours treats list. I ordered the Cashew Caramelised White and Cahabon 80% and based on these I’ll be returning for the Peanut milk.

One of Team Dormouse’s favourite bars, we’ve had this in stock before and we ordered one each at the start of lockdown. We got down the the last square after joining a Cocoa Runners tasting on Thursday and as if by magic a new bar arrived the next day in our subscription box!

Some vintage Damson, I used to love Dom’s Vietnamese bars and recall getting to try them all after they came out when we visited once. I was delighted when he announced he’d re-tempered some chocolate he’d squirreled away. The aroma hit me as soon as I opened it up. I also tried V1 of the speculoos and he popped in some Lachua! Dom is publishing all of his recipes online and has a Patreon if you’d like to support his experimentation and get help with your own!

Guest bars in the shop at the moment are….

Get them in store while you can, we like to keep a rotation going to keep things fresh. 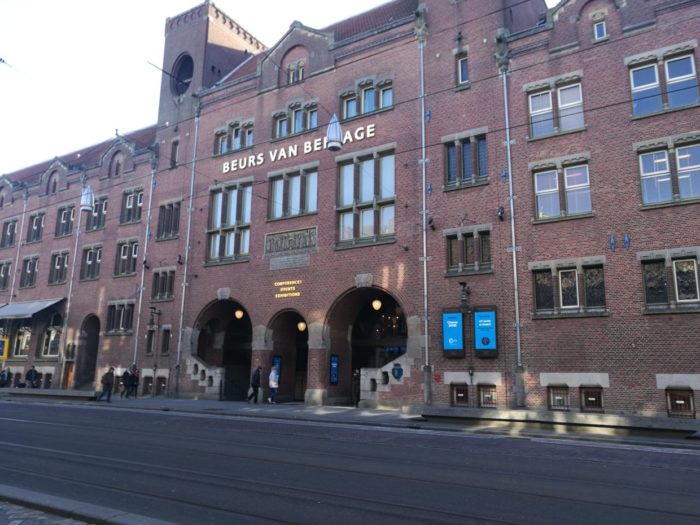 We were recently lucky enough to take a few days to visit Amsterdam for Chocoa – a conference and trade fair for people who work in chocolate. A very sleepy team Dormouse trundled off to the airport with two cases full of chocolate early on Wednesday morning and away we went!

Our first stop was the historic town of Zaandam. Sitting just outside Amsterdam, the town grew as a centre of industry as large factories could avoid paying the higher taxes charged for building within Amsterdam while maintaining canal links with the huge port of Amsterdam (the largest cocoa trading port in the world!). Because of this link, Zaandam is still home to some world’s largest chocolate processing plants, and is also where the cocoa traders Daarnhouwer are based – visiting them was our first stop of the day! After a brief stop at their offices to drop off some bars of chocolate and meet the team, we headed off to a cocoa bean tasting and tour of the Duyvis Weiner factory with some other makers and cacao farmers. They manufacture everything from roasters the size of our kitchen to much smaller scale equipment for people working with around 10kg of beans at a time.

Cacao tasting session, performing cut tests of Mexican beans that have been through different periods of fermentation.

We then headed for a a quick pancake together and look at some local working windmills and headed off to check in at our hotel in Amsterdam before making our next stop at Chocolatl.

We supply the shop with a selection of bars and were thrilled to be invited for a ‘Meet the Maker’ event while we were over.  We got there early eager to catch up with owner Adil.  We had been exchanging e-mails in the run up about the kind of things we wanted to talk about at the event and we share lots of views on the bean to bar world.  The primary theme of our conversations was ‘is it enough to say you are bean to bar anymore?’.  It is not always indicative of quality and as with any product, there’s good bean to bar and not so good bean to bar.  The Academy of Chocolate awards have this year declared bean to bar which uses vanilla be judged in the flavoured bars catagory.  We talked of the need as small makers to find new ways to talk about what we do and focus on how we work tirelessly to bring out unique flavours and push ourselves to try and stand out.  Just this last week Sharon Terenzi (also known as The Chocolate Journalist) published a post that also discusses this.  As she’s said before in Victoria Cooksey’s Tasters and Makers Series ‘bean-to-bar doesn’t have to be craft chocolate, but craft chocolate has to be bean-to-bar’.  Single origin doesn’t mean something is ‘craft’ or high quality. In one of the sessions we attended someone pointed out that Dutch supermarket Albert Heijn had recently released a range of origin bars for around a Euro, which to the untrained eye could be mistaken for something small batch when the reality is it’s probably manufactured in the same way as their other chocolate.

We had a great evening talking to people, the pressure is real when a couple have driven 1.5hrs to see you based on one bar!  Adil broke open a fresh pod for everyone to try and we sampled various cacao based liqueurs .

Thursday was the first day of the Trade Fair and Chocolate Makers Forum. A day spent chatting with new and old suppliers and maker friends and trying lots of different chocolate, with a highlight being trying origins we’d not had before on the Cocoa of Excellence stand. We attended an FCCI workshop on cacao grading which Carla Martin made both fun and fascinating and we are hoping to attend the training next time they are holding it in Europe. In the afternoon the Forum held a session on Bean quality: Evaluation, practices, and techniques (incl Cadmium regulations).

We also met Karthikeyan from Tree to Bar chocolate makers Soklet on their stand and got talking while someone was giving us samples of coconut sugar.  When we said we were also makers he told us there was only one company in the UK using their beans and had we heard of Dormouse Chocolates!

In the evening (after a trip to Foodhallen to try various delights for dinner) we returned to Chocolatl for an event hosted by York Cocoa House.  It was really inspiring listening to how passionately Sophie talks about getting their project off the ground and their plans to push the size of the British chocolate community! Sophie shared the history leading to her love of chocolate, as well as her favourite bars, with all those in attendance.  We were so happy to hear how things have been coming along so quickly since we visited only weeks ago.

On Friday we got to hang out with some friends from home as Phil from Land and Cocoa Runners were also around.  We attended sessions on economics and marketing hosted by Clay Gordon and Spencer Hyman and were happy to be picked on and pointed out by Spencer (in a good way) in both sessions.  The day ended with a truly international dinner with fellow makers, stockists and suppliers at an Indonesian restaurant Karen recommended and (surprisingly confidently) led the group to.  Much food and chocolate chat were had and bars were inevitably handed round the table to share.

We headed home literally full of beans and ideas for the next few months and beyond.  Look out for some new products and projects from us!

We had lots of room for treats in our cases coming back after we’d delivered all our orders! 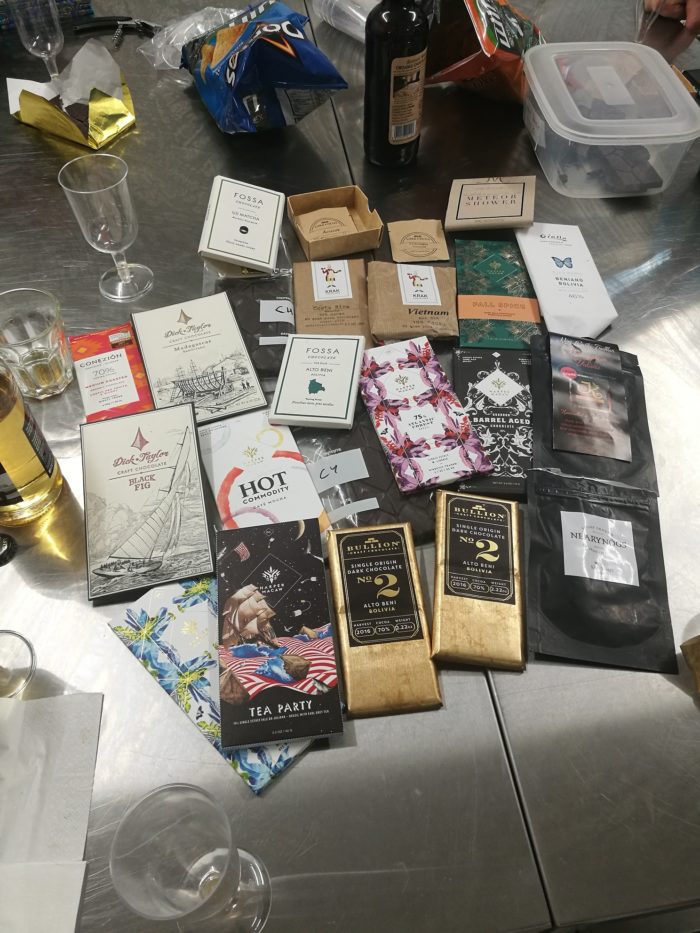 A couple of weeks ago we went down to London to eat some lovely food at Maltby Street Market and meet up with friends at Damson Chocolate in Angel.

It was lovely to catch up with everyone and meet Amanda, who has worked with Harper Macaw and is currently working with Dom, and Cherrie. Not pictured are Hazel and Carol who also popped by.

We took down an order from Dom to stock up the shop (eventful in itself – always check you have all your bags before leaving the train guys… fortunately, Joycelynn at Virgin was a star and we were reunited after it had a journey home to Manchester and back…). We also took Map’s beautiful Meteor Shower bar to share, flavoured with toasted sesame and lava salt and Krak’s Costa Rican and Vietnamese bars. Krak are one of our new favourite makers after trying so many of there bars when we visited Chocolatl last year, each so distinctive. Map too, we were lucky to receive a very special parcel of there bars at the end of last year!

Last weekend we hopped over to York for a mid-project preview of the new York Cocoa Works site with Paul from Cocoa Luxury and Max from Bullion.

We loved seeing the team at work in the booth at the Chocolate Show last year where they were carrying out live chocolate making for the crowds.Â  We made sure we sent customers their way to find out more about what we ourselves do.

It was great to get a feel for what they will be doing in their new space, as you can see they are aiming to be as transparent as possible allowing people to see every step.

They hope for it be a hub for other people to learn and get involved as well as produce their own chocolate for use by their other site, York Cocoa House, and other businesses.  We followed the tour by Sophie with a wander up to the Cocoa House for their house, bean to bar, hot chocolate and some lunch accompanied by much chocolate chat, about the ups and downs of breaking/winnowing different origins among other things!Â  Some beans are a joy, others frustrating!

Looking forward to catching up with people this month at the Academy of Chocolate judging and over in Amsterdam while Chocoa is on! 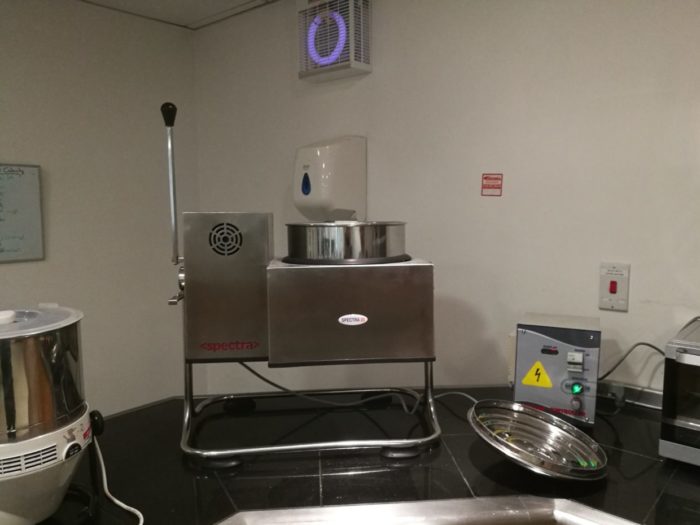 We are extremely lucky to be in a position to have purchased this beauty recently.

It’s a scaled up version of the small stone grinders we currently use but it can produce at least 10kg at a time rather than 3kg (occasionally 4kg if we’re really pushing it)! It’s a huge milestone for us as a company as it completely changes the way we work as we’re taking on an increasing number of wholesale orders. Bring on longer breaking and winnowing days (and a bigger cleanup)!